Obsidian - The Stone of Truth 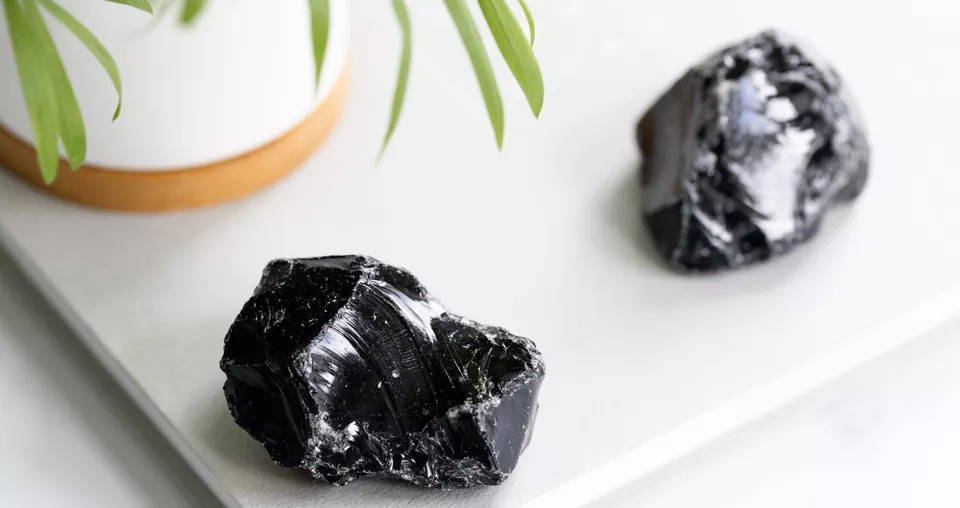 A gemstone unlike any other, obsidian is a beautiful, glossy, and often completely black crystal that is capable of fascinating and captivating anyone at the very first glance.
Nothing is hidden from the obsidian, one of the most powerful and all-seeing crystals there is, and today we're going to cover all about it!

WHAT IS OBSIDIAN STONE? 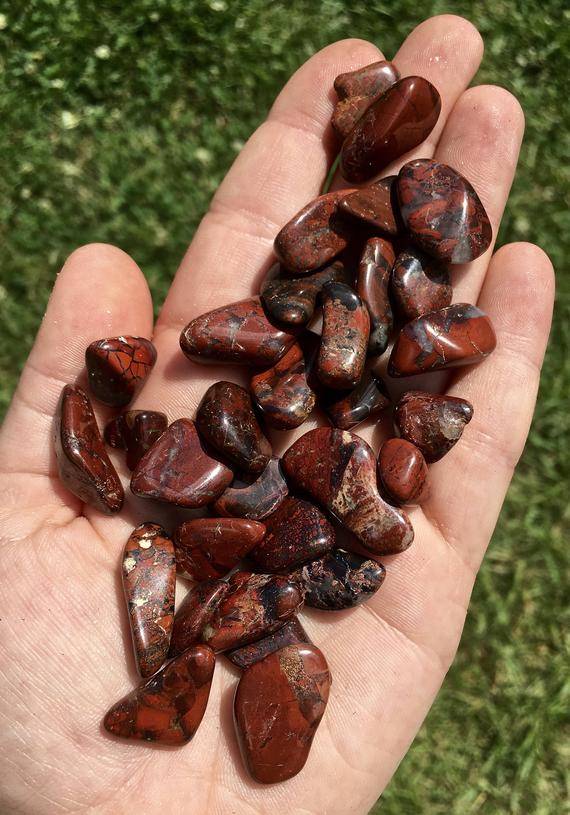 Obsidian stone is not an ordinary crystal by any means, after all, it doesn’t even have a crystalline structure. It’s a form of naturally occurring glass, that manifests when molten lava is cooled very rapidly (usually when pouring into a lake or an ocean).
Minerals that have a crystalline structure normally develop it over time, however, since an obsidian rock forms so quickly - there’s no time for crystals to grow, resulting in quite an irregular structure that can break and fracture easily.
The most common variety of this gemstone is black obsidian, but this mineral comes in a wide range of different colors.
Some even have a golden, silver or purple sheen to them (caused by tiny gas bubbles trapped under the stone’s surface), while others display iridescent bands of red, blue, gold, violet and/or green when exposed to bright light. This so-called rainbow effect is a direct result of microscopic magnetite inclusions.
When brown and black colors are both present, you get a mahogany obsidian. A black rock with some grey or white specks is often called snowflake obsidian.

THE HISTORY OF OBSIDIAN CRYSTAL

Obsidian’s origins date all the way back to the Stone Age.
It was used extensively, as this material was easy to carve and could also be formed into a sharp blade. It was used for knives, lances, arrows, axes and many other tools. Interestingly, even rudimentary mirrors were formed out of it by polishing the glass.
Pre-Columbian Mesoamericans used to rely on this volcanic glass a lot too. For instance, they carved and worked these rocks for tools and decorative objects, such as plates and other wares. The ancient Mesoamericans also made a type of sword called a macuahuitl, this weapon was capable of inflicting terrible injuries, combining the sharp cutting edge of an obsidian blade with the ragged cut of a serrated weapon. 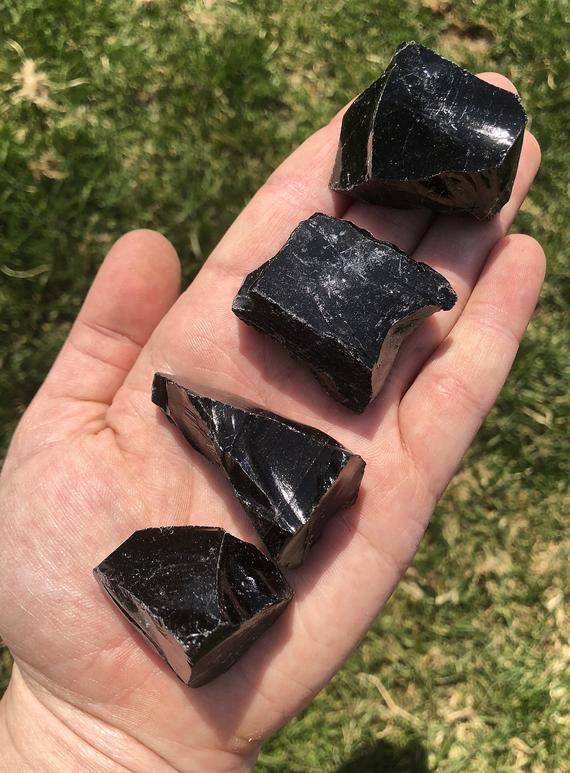 The Black Lava Glass (another name for obsidian) was used in trading by Mayan merchants, dating as far back as 100 years BC. Given the abundance of obsidian found in the area and its high value, it was considered incredibly precious, even more so than gold.
The mystical properties of this gemstone also date back to early civilizations. In ancient Mexico and surrounding regions, it was known as iztli or teotetl("the divine stone") and was used to carve amulets, jewelry, grave ornaments, and images of the god Tezcatlipoca, whose name means “smoking mirror". Supposedly, he saw everything that occurred in the world and the heavens through his obsidian mirror.
Each volcano, and in some cases each volcanic eruption, produces a distinguishable type of obsidian, therefore, it makes it very possible for archeologists to trace the origins of a particular artifact to the exact area where it was formed and later used. 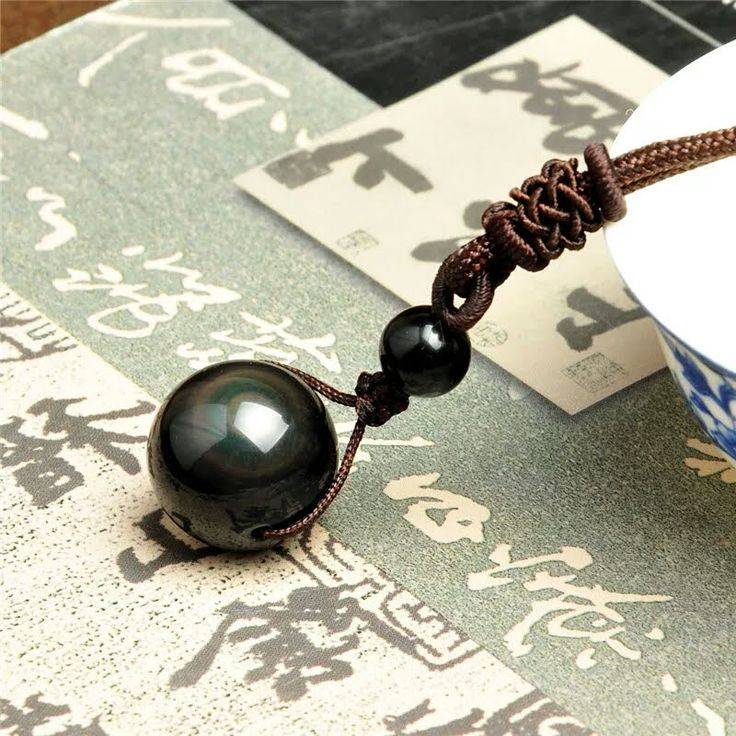 A truly stunning necklace & pendant, combining its majestic looks with the transformative powers of the Obsidian Stone. Contributes to the dissolution of emotional blockages & trauma, thus clarifying your mind & clears the confusion in order to help you experience who you really are.
Visit Our Store 👉 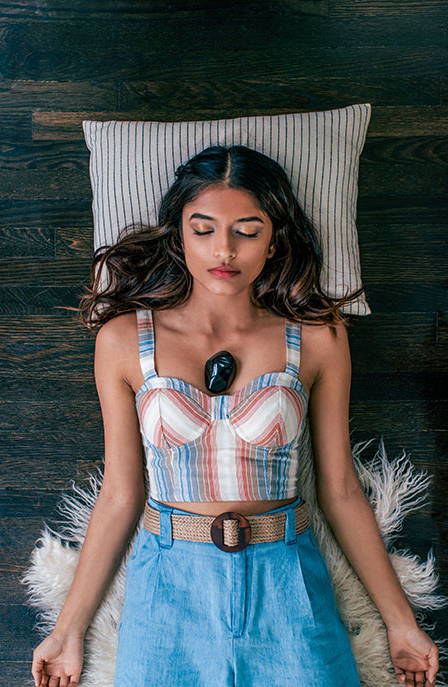 Obsidian’s meaning and its effect greatly depend on the color of the stone. Since the black variation of the rock is the most common one, we’ll be focusing on it exclusively.
Black obsidian is sometimes called the ‘’Stone of Truth’’ for a reason: it works like a mirror in which we can clearly see our own mistakes and weaknesses.
This powerful crystal can be brutal and direct, yet it is capable of providing the deepest kind of soul healing: the stone bestows all the courage needed to enter our subconscious mind in order to resolve any deeply rooted issues if we only dare to ask. It can give the desire and the drive to change something in order to finally move forward instead of being stuck in the past.
This crystal can sometimes bring negative emotions and truths to the surface, causing one to feel discomfort for a short period of time, however, if one is capable of listening and reflecting, the Black Lava Glass stone can help deal with such heavy issues as past traumas, addictions, eating disorders and much more. Many people can benefit from having more truth and clarity in their lives, and that’s exactly what obsidian provides.
It is a strongly protective stone, capable of shielding its wearer from all sorts of negative energies. It blocks any incoming psychic attacks and removes negative spiritual influences, and is a perfect companion for all the sensitive souls out there. It teaches us how to let go of the stress and anxiety that we tend to face on a regular basis, and makes sure that we stay calm and grounded during even the most turbulent of times.

Rich in healing properties, there’s a reason that Obsidian was considered to be so much more precious than gold.
This stone is all about stimulating growth, keeping you protected, and connecting with that root chakra – AKA the very essence of how we feel safe in this world. Obsidian doesn’t just stop at keeping your mind tuned in, it works to keep your physical and spiritual body completely aligned too.
We're sure you'll love it as much as we do!
If you'd like to carry the truth-enhancing effects & remarkable, dark looks of Obsidian Stone in one absolutely stunning pendant, checkout our Obsidian Eye Rainbow Pendant: 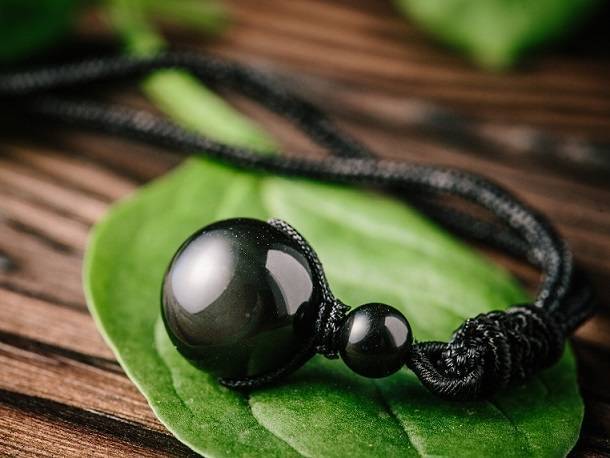